Depending on the age of your caravan or motorhome you may have Fluorescent or filament bulbs fitted. Now these ‘old’ light technologies have a couple of downsides when it comes to caravans and motorhomes. Fluorescents produce what many people regard as a poor quality of light which can give them headaches, my self included. Traditional filament bulbs can also be quite fragile. Hence not ideally suited to caravans and motorhomes bouncing along the road and hitting potholes. Furthermore, these lighting technologies are not the most energy-efficient. If you are running your caravan or motorhome from your leisure battery every watt counts. Therefore with this post, I’ll discuss the options for changing the existing internal lighting in your caravan or motorhome for LEDs. However, I’ll also discuss upgrading the external lights on motorhomes (headlights/reversing lights), to provide better visibility.

If you have read any of my previous posts you will know I like to include any relevant videos I can find. Well, this post on the best lights for caravans and motorhomes is no different.

Below is a video produced by Practical Motorhome on how to improve internal lights with LEDs.

What are LED Lights and why are they a Better Alternative?

There are lots of home improvement as well as caravan and motorhome websites discussing the use of LED lights. Many will discuss how LEDs use less power than traditional filament, halogen or fluorescent bulbs.

However, very few actually discuss what LEDs actually are and how they work. I also think they fail to properly acknowledge all the benefits of LED lights, as its not only about the reduced power consumption.

To start things off LED stands for Light Emitting Diode. It produces light when electricity is passed through a semiconductor. The type/material of semiconductor used will determine the colour of the light.

You can get some LEDs which contain both blue, green and red semiconductors which can produce any colour of light. White LED lights typically just use a blue semiconductor with a yellow coating.

The Benefits of LED Lights for Caravans and Motorhomes?

The first benefit that everyone references, and it is an important one, is power efficiency. An LED to produce the same amount of light as a filament bulb found in many second-hand caravans or used motorhomes will use a much smaller amount of energy.

An LED will typically consume at least 75% less energy than an incandescent (filament) bulb to produce the same amount of light. Hence, old filament bulbs produce more heat than light from the energy they consume.

Now, that’s obviously important when you’re running off your leisure battery, but it also plays a part with some pitch hookups. Let’s say you had an older caravan which used all filament bulbs.

Now, let’s presume you were on a site (not Horton Common) that had only a 6A supply. Well, if all those filament lights were changed for LEDs you would have a reduced chance of your caravan kettle tripping the supply.

Obviously, if you were wild camping off-grid with LED lights it means your battery is going to last longer, a lot longer.

Durability and Longevity of LED Lights

One of the other key benefits of LED lights is their improved durability and lifespan compared to filament bulbs. As a filament bulb produces light to heat up a very thin piece of wire that wire eventually snaps, which loses the connection and hence no more light.

As I’m sure we can all appreciate, the UK roads today can be pretty bad with deep potholes. Hence, when you hit these types of potholes with your caravan or motorhome those sharp jolts can be the cause of bulb failure.

LEDs, as a result, can be a much more suitable lighting solution for caravans and motorhomes. They withstand impacts such as potholes much better as they don’t rely on heating up a thin piece of wire to produce light.

Therefore, LEDs are typically referenced with a much longer working life compared to their filament cousins. Many LEDs are quoted with a 20,000 to 50,000 hours lifespan. Which is roughly 30 times longer than incandescent bulbs and 5 times longer than compact fluorescents.

However, I will add a caveat to the statement above. Cheap low-quality LEDs may not last this long. I’ve bought quite a few LEDs now for various projects including my home lighting. Very Cheap/low-quality LEDs are a false economy.

Therefore as usual with all things. Pay attention to reviews, both in quantity and rating. Also, pay attention to which brands and manufacturers appear to be getting consistently good reviews across a range of LED lights they produce.

What The Heck Is A Lumen?!

In the past when replacing bulbs you would look at the wattage rating to determine how bright the light would be. Well, with LED lights their light output is not measured in watts, its measure in lumens.

A lumen is a ‘unit of luminous flux’, essentially its the total quantity of visible light emitted by a source over a set time. As LEDs consume so few watts to produce the same amount of light as a filament bulb using lumens makes more sense.

However, if you are replacing a filament bulb in your caravan or motorhome of a certain wattage how many lumens is that? Well, the video below from Integral who is an LED manufacturer ‘shines some light’ on the subject.

While we have guests with all different sizes and classes of motorhome, units built on the Fiat Ducato, Peugeot Boxer or Citroen Relay are the most common.

That obviously includes coach built motorhomes and panel van conversions. Something which has come up in the past is some guests having a real difficulty removing their motorhome headlights to change the bulbs.

Now, you could obviously change a failed headlight bulb with a like for like replacement bulb. However, that’s not really what this post is about. This post is about how you can improve the lights on your motorhome.

I’ve had guests in the past comment to me about their motorhome headlights performing like small candles and the stress that caused them navigating roads they were not familiar with.

So what options are there, LED headlight bulbs? Sure, typically the Fiat Ducato based motorhomes use the H7 headlight bulb. However, you always have to check the type specified for your motorhome.

However, if you were considering a change to LED headlights I personally wouldn’t be comfortable choosing an unbranded product for a fraction of the cost. Logic dictates those significantly cheaper products are not going to last.

Therefore if the Philips H7 LED headlights are out of your budget I would personally just stick to standard halogen headlights for the meantime.

So whether you have a caravan and tow car or a motorhome if you struggle with visibility when reversing I would definitely encourage you to consider some LED reversing lights. This is from personal experience. Our now pretty old (2006) Nissan X-Trial had the most pathetic reversing lights I’ve ever come across.

You would put the car into reverse and at night you just couldn’t see what was behind you. So probably about 5 years back now we swapped out the old reversing bulbs for some LED bulbs.

The difference in terms of reversing visibility was huge. This improved visibility obviously pays dividends when reversing up to a caravan hitch in the dark.

Some of our motorhome guests have had reversing cameras fitted. These can be of great benefit to many motorhome owners, especially those who have to reverse on their own without a second person to spot them.

Conclusions on the Best Lights for Motorhomes and Caravans

However, you would obviously want to check you are not invalidating your warranty though. On older caravans and motorhomes changing the lights to LEDs can make a big difference. You can get a much brighter and more comfortable living space which at the same time consumes far less power.

Also, don’t forget the exterior lights on your tow car or motorhome. Headlight and reversing light LED replacements can provide much better visibility and are less likely to go ‘pop’ when you hit potholes.

Anyway, thanks for reading. I hope this post on the best lights for caravans and motorhomes have given you something to think about. I also hope at some point in the future you consider coming to visit us here at Horton Common. 🙂 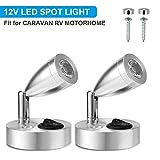 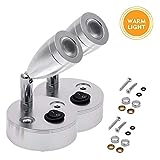 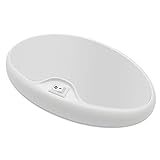 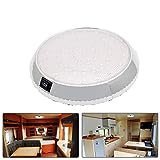