I recently wrote a post on how to avoid caravan snaking while towing. While my main emphasis of that post was to focus on caravan weight limits and proper weight distribution, caravan stabiliser hitches play their part. At the time of writing that post, I thought to myself ‘you really need to finally write that post on changing hitch friction pads!“. Therefore here it is, and its pretty comprehensive. As with many of my posts, I reference the best sources of information/videos I have found on the subject of how to change friction pads and linings. Furthermore, please use the Table of Contents link below to jump to the section specifically relevant for AL-KO or Winterhoff caravan stabiliser hitches.

I’ve managed to find quite a few good instructional ‘how-to’ videos with regards to inspecting and changing the friction pads and liners on AL-KO hitches.

Unfortunately, for the Winterhoof WS3000 Mk2 & Mk3 stabiliser hitch, there are not currently any videos I can reference on changing the pads.

However, Winterhoff has provided quite a good step-by-step diagram which I have found and included further down in the post below.

Now, the information below is obviously applicable to a DIY repair. You could have your service centre carry out the work if your not comfortable to do so.

On the annual service, they will be checking the condition of the friction pads and changing them when required. However, I also know a lot of our guest do actually service their own caravans.

So the information below about how to change stabiliser hitch frictions pads is of value to many people.

How Do You Know When You Need to Change Caravan Hitch Friction Pads?

Well, there are a couple of signs which could indicate to you the friction pads need to be replaced or polished and some shims added, they include:

Our guests have indicated to me both of the issues above. After inspection and replacement of the hitch friction pads, I received feedback that both issues were addressed.

By their very nature, being friction pads, they are a wearable item. How fast the friction pads wear will obviously depend on how often you tow your caravan and the sort of distances you cover.

When the friction pads are engaged against the cars towball movement of the caravan creates friction. The friction its self wears the pads away, however that friction also generates heat.

The best video currently out there on how to change AL-KO friction pads is by the YouTuber Dan Trudgian. In the video below Dan shows how to remove the old friction pads.

However, Dan also discusses when and how the friction pads can be reconditioned and the use of friction pad shims.

As you can see in the video above you can clearly see the glazing on the surface of the friction pads. Dan cleans off this glazing (melted pad material) with sandpaper and some brake cleaner.

I personally would also follow a similar approach. Dan mentions using rubber/latex gloves because its a ‘messy job’. However, I would encourage you to wear gloves when using any solvent cleaner which contains acetone etc. Its just ‘bad stuff’, and you don’t want it in contact with your skin.

Why would you even want to consider bothering with cleaning up/repairing the friction pads and using shim washers? Well, new AL-KO friction pads for what they are made of are pretty expensive.

However, if you are not able to properly clean off the glazing on the friction pads they are still likely to produce various groaning noises while towing. Furthermore, at some point, the pads will need replacing.

Another quick point I want to reference. A guest once told me they purchased an AL-KO friction pad set and it included the metal washer shims.

They were under the impression that you should fit the shims with the new friction pads. If you do this when you come to try and hitch up to your car you will notice you cannot lower the stabiliser handle.

The shim washers with new friction pads won’t provide enough clearance to actually lower the stabiliser handle. Yes, you want it to feel a tight fit, but that’s too tight.

So the above video from Dan discusses the repair and replacement of the two AL-KO friction pads that grip the sides of the towball. However, on AL-KO caravan stabiliser hitches there are actually two more contacts points.

One at the front and one at the back. Now the front friction liner and rear pad tend to last quite a bit longer than the side friction pads. However, they are still wearable items, and they will fail at some point.

Unfortunately changing the front friction liner and rear friction pad is a bit more involved than the repair/replacement of the side friction pads. You will actually need to get a set of Torx head screwdrivers and start taking the hitch apart.

Furthermore, you will need to get underneath the hitch to actually see what you are doing. Therefore you don’t want to be doing this in your best clothes, as you will be getting on your knees and back to complete this job.

I found a good video produced by Julian of the YouTube channel Here We Tow on the process of replacing the AL-KO friction liner.

As in Julian’s case, you may need to replace the front friction liner if its broken off. Another scenario may be that you have changed the side friction pads and you are still hearing noises coming from the caravan hitch while towing.

If that’s the case, then you may need to replace the front friction liner and rear friction pad. Its not really possible to repair/recondition these items, unlike the side friction pads. There are no shims available etc. If these parts are worn/broken you will just have to ‘bite the bullet’ and replace them.

While most caravans on UK roads today currently use AL-KO stabiliser hitches there is a significant number that have the Winterhoff WS3000 hitch instead.

The principle of how the Winterhoff WS3000 works is very similar to how the AL-KO hitch works. You lower down a large handle which compresses friction pads against the sides of the towball.

However, while the Winterhoff friction pads may be similar to the AL-KO friction pads they appear to be made from a different composite material. Furthermore, they do not have long extended pegs on the back as part of the fitment.

What is also worth noting is while the AL-KO hitches have 4 wearing points (two side pads, a front liner and rear pad) the Winterhoff WS3000 hitch just uses two friction pads, one at the front and one at the back.

Even if you are not currently hearing strange noises from your caravans tow hitch while on the road its good practice to inspect the friction pads annually.

If you only use your caravan for a couple of weeks/weekends over the spring and summer months you should get many years out of a set of friction pads. However, its important to remember the condition of your towball is very important. For instance, it should be clean from any sort of grease/lubricant.

Otherwise, the purpose of friction pads to aid with stable towing is pretty redundant. Furthermore, you want to make sure your tow ball is not corroded/rusty. A rusty towball will accelerate the wear of the friction pads.

Thanks for reading, I hope the above information/videos help you to change the friction pads on your AL-KO/Winterhoff caravan stabiliser hitch. I also hope in the near future you consider coming to pay us a visit here at Horton Common caravan site. 🙂 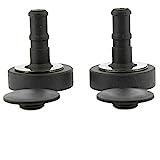 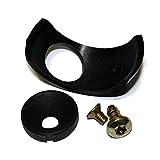