Most of our caravan guests who visit Horton Common appear to be aware of their payload limits and how important it is to properly load a caravan. However, I would generally say there is less awareness with motorhome owners in terms of their payload limits and the importance of how to safely load a motorhome. With caravans, if the noseweight is too high or low the consequences are pretty obvious, with the caravan pitching up and down while towing. Furthermore, improperly loading a caravan can lead to snaking while towing. However, with motorhomes as the weight is distributed over a larger area with wheels in each corner the consequences of overloading and improper weight distribution are generally not as obviously apparent. However, an overloaded and improperly loaded motorhome can be illegal, invalidate your insurance and can impact braking/handling performance.

I think part of the problem is because the differences in payloads between caravans and motorhomes can be quite significant. For instance, with caravans, while there can be a difference in payload allowance between single and twin axle caravans a payload limit of around 150kg is fairly common. However, with motorhomes and campervans, the payload allowance is commonly much higher, into several hundred kilos. I think this gives some motorhome owners a false impression that their belongings would not approach this weight limit. Though that’s often not the case for the reasons discussed below, such as the overhang issue.

Introduction On How To Safely Load a Motorhome

A noticeable difference between motorhomes and caravans is the rear garage. Some caravan do have a rear locker which extends across the rear of the caravan. While these lockers can be useful to store long poles, awnings and leisure items such as skis they cannot really be referred to as a garage. However, many motorhomes come with a much higher storage locker behind the rear axle, commonly referred to as a garage. As such, in many instances that ‘garage’ will be used to store bikes and even scooters/mopeds.

Furthermore, in some instances, a bike rack is fixed to the back of the motorhome. The above can lead to what is commonly referred to as the ‘overhang issue’ as this weight is behind the rear axle. Hence, as you place weight further away from the axle the effect of the weight is multiplied. I’ll discuss this more below. However, first I would encourage you to watch the video below from Caravan Guard with some general advice on how to properly load your motorhome.

The video above contains a lot of important information on how to properly load your motorhome which I’ll discuss more below. First though, I want to emphasize the tips at the end of the video for loading a motorhome:

As is stated in the video above, before you can load your motorhome and keep under its payload limit you need to know what that weight limit it. Therefore, you will need to be able to find, read and understand your motorhomes weight plate. I have a separate post on how to read motorhome weight plates, so please read that for reference. You will learn what the terms such as MIRO and MTPLM mean. Obviously, as you would expect, generally larger motorhomes have larger payload capacities. However, that’s not always the case. For instance, panel van conversions can have higher payload capacities than coachbuilt motorhomes of the same physical size. Why? Well, the panel van conversion is using a commercial chassis, where the coachbuilt motorhome will likely be using a lightweight AL-KO chassis. I also discuss these differences in my post on campervans vs motorhomes.

Do You Know Your Real Remaining Payload Capacity?

After finding and reading the weight plate on your motorhome you will have a figure for payload capacity. However, its important to remember that’s a starting point. In other words, there may be items fitted to your motorhome which are eating into that payload capacity. For instance, if you have solar panels, a satellite dish or air conditioner on the roof of your motorhome they all have to be discounted from the payload capacity. Furthermore, many people forget to discount the weight of their gas bottles from their payload allowance. Hence, it can make a big difference on your remaining payload having one or two gas bottles, especially if they are steel bottles. Some motorhomes have underbody steel refillable gas bottles. A very handy feature to have, but they can make a significant dent into your remaining payload allowance.

How To Weigh Your Motorhome and Belongings

As shown in the video above, once you know your remaining payload allowance weighing each item as you load it into the motorhome is a good idea. It will give you a good general idea if you will be within the payload limit and hence the motorhome will be legal on the road and your insurance will be valid. As I discuss in my post on how to weigh a motorhome there are also portable weigh scales you can purchase. I do think these are a useful tool to own. However, I would always recommend going to a public weighbridge to get the most accurate weight figures. What the portable weigh scale can do however is reduce the number of trips you would need to make to the weighbridge. As with the portable weigh scale should indicate whether you are at least likely to be under your maxium weight limits for each axle.

What is the Overhang Issue?

Before I discuss how you calculate if you have an issue, I should really explain what the issue is. The problem is to do with pivot points and leverage, so basically physics. Your motorhomes rear axle is the pivot point. The amount of leverage depends on the length of overhang beyond the rear axle. In other words, how far away is the rear of your motorhome from the back wheels?

To find out if you do or do not have a motorhome overhang issue you’re going to have to get your tape measure out and do some maths. You will need to know the distance between the wheelbase (front and rear axles). You will also need to measure the distance between the rear axle and the overhang where the additional weight is placed. Remember, if you have fitted a bike/scooter rack you need to measure to the back of the rack, not the back surface of the motorhome. Caravan Guard did a post quite a few years back with the example below:

To find out if you have a motorhome overhang issue, you have to use the following formulas. Please also note W refers to the wheelbase length and O refers to the overhang length. First off, you need to calculate the new front axle load.

Now that we know the new front axle load is 1454.54kg we can calculate the new rear axle load, including the weight of the bike/scooter rack.

Hence, instead of the real axle load with the bike rack simply being 2200kg, the additional leverage of the overhang is adding an additional 45.46kg of force. The new figure of 2245.46kg would then need to be checked against the maxium legal weight for the rear axle. You will then know if you have a motorhome overhang issue or not.

Conclusions on How to Safely Load a Motorhome

The main reason I wanted to write this post was to bring attention to the motorhome overhang issue. I have previously written posts about motorhome weight plates etc. However, by simply the reading the weight plate and measuring the weight of your belonging you are not getting the ‘full picture’. Whether you have a potential overhang issue with your motorhome does obviously depend on the length of your overhang and if you want to carry bikes/scooters. However, I know quite a few of our motorhome guest now have electric-assisted pedal bikes. Two of these electric bikes and their battery packs can be pretty heavy. Hence, when placed on the back of a motorhome they can result in a motorhome overhang issue.

Anyway, thanks for reading this post. I hope the above formulas/calculations make sense. Maths is not my particular strong point, so I tried to lay it out in a way that hopefully everyone understands. I also hope at some point in the near future you consider coming to visit us here at Horton Common to experience our fully serviced pitches and amazing views. 🙂 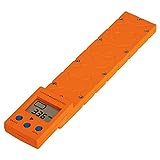