What I would like to emphasize is that annually you should be having your caravan serviced. During that service, gas pressure tests will be carried out. That test would likely identify issues with the caravan gas regulator. This post is broken down under a series of sub-headings. You can use the Table of Contents below to jump to any particular section. However, if you do have the time its best to read the post as a whole. That will give you the best understanding of what the potential issues with your caravan gas regulator may be.

First, I better briefly describe what a caravan gas regulator actually does and how it works. The pressure and flow of gas straight from the LPG bottle unregulated is much higher than the appliances in your caravan require. Therefore the regulator’s job is the reduce the pressure of gas leaving the LPG bottle. Before the gas reaches your caravans hob, cooker, water heater or fridge. Previously on caravans before 2003, gas regulators were fitted to the bottles themselves. Some caravanners choose to use butane or propane. Each has its own pros and cons which I’ll cover in another post. After 2003 the gas regulator was installed into the caravan front locker its self. You simply have what’s called a ‘pigtail’ flexible gas pipe from the caravan gas regulator to either a propane or butane gas bottle. However, this is when a new issue started to occur:

John does a very good job of clearly and succinctly explaining the potential issue. While the caravan gas regulator may be affected by this issue, its not actually the cause of the gas blockage. I’ll now summarise John’s points below along with a few of my own comments.

You may start to become aware of potential issues with the caravan gas regulator when your appliances start to underperform or stop working altogether. The appliances in your caravan which use gas include your hob, cooker, fridge, hot water heater and space heater. Just a quick note, some caravan fridge problems as bizarre as it sounds may be due to your new tow car. Many people only use their caravans during the summer months and on a serviced pitch. Therefore its typically using either the hob or cooker when a caravanner will become aware of an issue with the gas system. You may start to notice a smaller flame and less heat being produced. This would obviously make you think, ‘oh the caravan gas regulator must have failed, its not getting enough gas through’. However, the issue may be a little more complicated.

As stated by John in the video above, the issue in several cases under further inspection has been due to blocked gas nozzles. An oily substance has been cleaned from the gas jets. This oily substance has also been found within the caravan gas regulator its self. Within a caravan gas regulator, there is a diaphragm and spring. The oily liquid blocks the diaphragm from opening sufficiently to let through enough gas. But what could possibly be the cause of this oily substance clogging up the gas jets? Well, it turns out the issue may be down to that short piece of flexible gas pipe linking the regulator and LPG bottle, the pigtail.

The source of this oily liquid substance which has been blocking up the gas jets on caravan appliances was traced back to the gas bottle pigtail flexible pipe. Under chemical analysis, it was found that the oily liquid contained what is called a plasticiser. The pigtail contains a plasticiser to keep the pipe suppler and flexible over time. What’s important to remember about the pigtail from the LPG bottle is that it carries high-pressure gas from the bottle to the caravan gas regulator.

If you have noticed, depending on the ambient air temperature around a gas bottle and humidity you can get condensation forming on the outside of the bottle. I won’t get into the ins and outs of why that happens with this post. However, whats important to note is when gas is stored under high pressure, condensation is a common occurrence. As the pigtail also carries high-pressure gas, it too at times is subject to condensation. And its the formation of condensation which can draw the plasticiser out the pipe. This oily plasticiser can then block up the caravan gas regular and other appliances.

How to Fix ‘The Pigtail Problem’?

Well, there are a couple of ways to address the issue of condensation and flexible pigtail gas pipes. However, if your pigtail has already created a blockage due to its denatured state, the gas engineer has got some work on his hands. The gas jets on the appliances will have to be cleaned and the gas regulator replaced. But to try and stop the issue reoccurring the following steps can be taken:

Positioning the Gas Regulator Higher Up

First of all, if you are using large LPG bottles that pretty much touch the top of your gas locker there is a problem. While the caravan gas regulator may still be higher than the bottle, the pigtail will likely loop down and then back up to the bottle. Hence, the condensation doesn’t fall back into the bottle, it sits in the loop of the pigtail pipe.

You also want to make sure you don’t have pigtail gas pipes which are too long. You want them to be just long enough so you can connect the bottle to the caravan gas regulator. Therefore, if you change the size of LPG gas bottles you use in your caravan or motorhome, you also want to change the length of the pigtails to suit.

Change the Pigtail at Least Every Five Years

This only applies to the orange or black flexible pigtails, not the stainless steel pigtails below. All rubber-based hoses denature over time and become less flexible. This can actually also lead to gas leaks. I and my father recently noticed a smell of gas from within his caravans gas locker. After doing a gas pressure test which failed we looked to replace the orange flexible pigtail. After doing so we completed another gas pressure test which it passed. Hence to avoid issues with flexible rubber gas pigtails its best to change them at least every 5 years. Therefore, its also something I discuss in my post how to change a gas bottle.

Have a Gas Filter Installed

Have a look in the front locker your caravan. If you don’t see a gas filter similar to the image below fitted next to the caravan gas regulator it may be worth asking your gas engineer to fit one. The filter should stop any potential plasticiser/oily residue going through the regulator and causing issues. However, you will have to remember to periodically change the filter or your gas system may again become blocked up. If you don’t already have a gas filter you could also consider putting your money towards a stainless steel pigtail gas pipe.

Use a Stainless Steel (SS) Pigtail to the Gas Regulator

Currently, this post just references the most prominent issue I’m aware of why a caravan gas regulator could fail. However, I will also update this post at a later date with a summary of other potential issues I can provide solutions for. What is important as referenced above is that you have your caravan annually serviced as the whole gas system will be checked for leaks and efficient combustion. Hence, any issues with your caravan gas regulator should also be picked up during that service.

I hope you learnt something new today, and if you do have a black or orange flexible pigtail which is over 5 years old I personally would look to get that changed. I also hope you consider coming to visit us here at Horton Common in the near future. 🙂 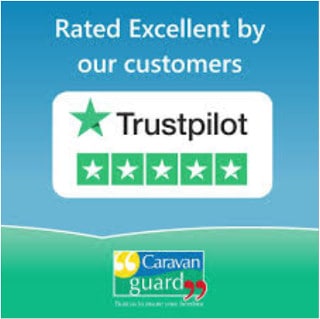