I remember back when I was a child the large camping light we used to have sat on the table in our caravan awning. It used a traditional (inefficient) light bulb, was really heavy due to the battery and even then it would only provide light for a couple of hours. Well, today with LEDs there are much better options for lighting up your caravan awning. Due to the lightweight nature of LEDs strip lights they can be fixed high up in the awning ceiling or on the side of the caravan to provide much better illumination. With this post, I’ll discuss some things you need to consider with caravan awning lights.

For instance how bright do you want/need them (lumens) and would you prefer warm white or cool white LEDs? I’ll also reference how to produce your own DIY caravan awning lights if you’re up for the challenge.

You obviously don’t have to go down the LED route for lighting up your caravan awning, but really they are by far the best choice. LED lights are now so cheap and they consume so little power relative to traditional bulbs they just make the most sense.

As I’ve stated above, a particular issue with old camping lights used in awnings was their weight. Hence, you could maybe hang them up in a pole awning but it was sometimes a bit dodgy. Many of our guests now are choosing to go with inflatable air awnings.

In that scenario, there is no way you could hang a traditional camping light from one of the air support beams. However, with lightweight LED light strips its now possible to make any awning (air or pole) well lit.

Introduction to Lights for Caravan Awnings

Ok, let me just presume we’re all on the same page here and LEDs are the awning light of choice. So the first question to really ask is how much light do you need and how is it measured? A lumen is the means to rate how much light is produced by a source within a unit of time.

Different rooms/uses require different amounts of light. For instance, bedrooms require less light than a kitchen, so you can actually see what you’re cooking.

Well, you could apply the same principle to lighting up your awning. I would advise not going over the top with too many lights. First, it’s generally used a storage area or bedroom, hence a lower light requirement.

Secondly, even if your awning has curtains light will escape through the fabric etc. Therefore, you want to be considerate to your site neighbours. Especially if you have the awning light on late into the night.

So How Much Light (Lumens) Does a Caravan Awning Need?

Ok, so let’s take a pretty large awning, say 3m wide, 5m long and an average height of 2.5m. A Lumen calculator set as a bedroom comes out at 1,800 lumens. Remember, this is a large awning, so let’s just take this 1,800-lumen figure as an extreme scenario.

Well, typically, products such as the Kampa awning light which is about a meter long will produce 800 lumens. Hence as a general rule of thumb, an average-sized awning or porch awning would be fine with a single 1-meter awning light strip. A larger awning may require two LED light strips.

With several of the LED caravan awning light sets available such as the Kampa above, up to 3 lights can be linked together and it comes with remote control. They also come with a 230V or 12V power adapter depending on if you intend to run the awning lights from a site hookup or purely from the leisure battery if your off-grid/wild camping.

Now, its worth noting that many of these LED caravan awning light kits come with a 2 pin 230V transformer. Therefore you will need a 2 pin to 3 pin plug adapter.

A typical 1m (800 lumens) LED awning light set from Kampa above currently costs around £35. Now, individual opinions vary but for that price, I wouldn’t be inclined to spend the time to produce my own DIY caravan awning lights.

However, if you have a large awning and you want multiple lights then you may believe its worth the time and effort. Furthermore, with a DIY project, you would have more control over the intensity of the lights, warm or cool white (more on that later).

Below is a video from Dan of the YouTube Channel Meet the Trudgians. If you are inclined to carry out your own DIY caravan awning light project I would encourage you to give the video below a watch:

So I’m not going to embellish on Dan’s video on how to produce the DIY caravan awning lights. However, I do want to add a bit more detail on things to consider when choosing LED light strips for a DIY project.

I discussed earlier in the post how light intensity/brightness is measured in lumens. The higher the lumen rating the brighter the light is, simple! Well, there is something else to consider, the actual colour of the LED lights.

Now, for visibility, its generally considered that blue/cool LED lights with a high Kelvin number are better. Hence, the lights Dan used in his DIY awning light project above are cool white 6500K. Personally I don’t particularly like cool white LEDs, I find it quite a harsh light to look at. Therefore, I personally prefer warm white LEDs.

When making your own LED caravan awning lights you can choose the LED light strip which is best for you. With off the sheld options such as those by Kampa with the remote control you can adjust the brightness.

How to Mount Lights for Caravan Awnings

Now you have got your awning lights (DIY or Off-the-Shelf) you have to decide how you are going to mount them. There are various ways you could do this from simply using bits of string or tape. However, the best method I think is adhesive-backed velcro strips.

This way you can fit the lights pretty much anywhere on either a pole or air awning which works best for you. However, placing the lights higher up in the awning ceiling will provide you with the best light distribution. It may, therefore, mean you get sufficient illumination from one light instead of two.

With a roll of adhesive-backed velcro, you simply stick one side on your lights and the other side on your chosen location on the awning. The strength of the adhesive will likely vary depending on which brand you choose. Hence, after packing up your awning a couple of times that velcro may end up going astray. Therefore, its not a bad idea to keep the adhesive velcro strip in the caravan so if you do need more its always to hand.

Conclusions on Lights for Caravan Awnings

The objective of this post was not to push a particular make or brand of caravan awning lights. Or to imply everyone should be making their own. I just wanted to emphasize some of the key considerations in terms of how much light you actually need (lumens) and the type of light colour (cool or warm light).

Also, why LEDs are the best lights for caravans and motorhomes. Something else I did want to acknowledge as Dan states in his video is how this same time of caravan awning light could also be used in the wet locker. Why all caravans don’t come with a light in the wet locker already I have no idea.

Many people store blue toilet chemicals in the wet locker. When you absolutely have to empty the toilet cassette at night that light would provide a real benefit. Though I must admit, head torches are brilliant for that problem!

Anyway, I hope this gave you some food for thought before you decide the route you’re going to go down for your caravan awning lights. I also hope you consider coming to visit us here at Horton Common in the near future. 🙂 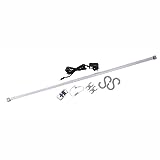 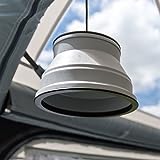