Running a small campsite I do get to see lots of different awnings each year. For instance, the ‘new trend’ is definitely air awnings and I see a lot of guests choosing that option. I recently wrote a post about air vs traditional pole awnings which you may want to review. Caravan awnings obviously come in various different shapes and sizes. Large awnings are suitable for longer stay trips with smaller porch awnings suitable for weekend getaways. However, there is another type of awning which I do see on a couple of caravans each year, and that’s rollout awnings. So with this post, I thought I would discuss why you may or may not want to consider rollout awnings for your caravan. What are the pros and cons of rollout awnings, in short, are they any good?

I have also written a post about motorhome awnings, where I discuss rollout and wind out awnings, along with driveaway awnings. Within that post I do reference rollout awnings, but not from the context of owning a caravan. As I discuss in my post campervans vs caravans, the use case and appeal of each leisure vehicle is different. As is the case with rollout vs windout awnings on caravans. For instance, you typically won’t find a windout awning fitted to a caravan, though not impossible. The main reason is due to the impacts on payload which I discuss more below.

I have a couple of different type of guests who arrive at Horton Common each year with a caravan. Those that don’t own an awning as they don’t feel they need one or want the hassle of putting one up. Those guests that own one awning, typically a large awning which they sometimes put up depending on their length of stay. The other type of guest is those that own more than one type of awning. For instance, they may have a large awning that they bring for longer stays with us. However, for short stays, they also own either a porch awning or in some cases a rollout awning. The point being, when it comes to any type of caravan awning each is suitable for a different use case.

A typical example of a caravan rollout awning made by Fiamma: Image – Amazon

Rollout caravan awnings are generally more suited for short stays. Furthermore, rollout awnings are frequently referred to as sun canopies for good reason. The majority of times I will see a caravan on Horton Common with a rollout awning will be with guests staying over the weekend in the middle of summer. They don’t have the need for a fully enclosed awning. They are just looking for something which can provide a seating area and shade from the sun. I frequently like to add videos into my posts to provide context and additional information. The video below from the YouTuber Dan Trudgian shows Dan’s experiences with the installation of a rollout awning for his caravan.

Its interesting to note from Dan’s video above his comments for choosing to take his rollout awning on a Europe trip rather than his air awning. I’ll discuss those points below more under the benefits of rollout awnings. Something which I first want to discuss is how a rollout awning is fitted to a caravan.

How is a Rollout Awning Attached to a Caravan?

A typical example of an awning rail brush and lubricant: Image – Amazon

A caravan roll out awning is typically going to weigh between 25 and 35kg. Therefore, its going to be a two-person job to fitt the rollout awning into the rail. Furthermore, when you set up the roll-out awning on-site its also going to be two-person job due the weight and size. When it comes to fitting and removing the rollout awning to make it as easy as possible you’re going to want to make sure the awning rail is as clean as possible and lubricated. Therefore, using a brush similar to that shown above and a suitable lubricant is a good idea. Don’t just use any oil/lubricant, not only could the awning get pretty sticky but none specific lubricants may damage the rollout awning fabric.

Benefits of a Rollout Caravan Awning

I’ve shown an image and video above of some typical caravan rollaway awning examples and how they are fitted to a caravan, now let’s discuss benefits. The first benefit is no impact on internal storage space. With any other type of caravan awning, you are going to be taking up storage space within either the caravan or your tow car. With a rollout, awning attached the side of your caravan its not taking up any internal storage space. I will add a small caveat here. It does obviously depend on if you intend to order/take with you side panel covers. These would then have to be stored separately inside your caravan or tow car. However, as I’ve stated above, most people use rollout awnings as just a sun canopy for their caravan.

Rollout Awnings are Quick and Convenient

The second benefit is speed/convenience when setting up. Again, let’s use the scenario that you are taking a weekend/summer break. You want to spend the day outside but at the same time, you want some shelter from the sun to sit, cook on the BBQ etc. A rollout awning can be set up in just a few minutes. It can also provide an excellent sunshade for dogs if you have them. That speedy and convenient setup also applies to when you leave the site. With a traditional awning, you could be spending an hour or more to pack it all away. Again let’s pretend you’re on a short summer weekend break. With a rollout awning, you could be sitting outside underneath it until a short period of time before you need to leave the campsite.

You can get very short (less than 200cm) rollout awnings for even the tinniest caravans: Image – Amazon

As Dan discusses in his video above. Another benefit with a rollout awning is that it can be a temporary sun canopy. Or with additional side panels, it can become a ‘full-on’ awning. In Dan’s case, he was embarking on a European tour. Therefore, on some of the campsites, it would be a one night stay. Hence, just the canopy on its own may be sufficient. However, if their stay was longer, then the sides can be attached to provide more privacy and additional living space.

A previous guest to our campsite did tell me about this issue. Reading some of the forums online it has been reported by others. As stated, the rollout awning stays attached to the awning rail on your caravan. Therefore, while towing some people have reported that their rollout awning has damaged the aluminium side panel of their caravan. Some rollout awnings use straps and metal buttons. Well, apparently these metal buttons have ended up making dents/impressions into the caravan bodywork. This potentially happens as the caravan is bouncing along. Maybe even hitting a pothole or two which are pretty much unavoidable on UK roads.

If you are concerned about a rollout awning damaging the sides of your caravan during transit Isabelle produce their lightweight and quickly removable shadow sun canopy: Image – Amazon

So as discussed a rollout awning will typically weigh between 25-25kg. Therefore you have to discount that weight from your caravan payload. Now, you may be thinking, ‘But Chris, the impact on the payload is applicable to all caravan awnings!?’, and you would be right. Its quite common to find a traditional pole awning or an inflatable awning which also weighs 25-35kg. Therefore, why is it a specific drawback for a rollout awning?

Well, the reason is, as many caravan owners know, to get a caravan payload within its legal limit it sometimes means loading the awning into the car. With a rollout awning which is left fitted to the side of the caravan while towing, that’s obviously not applicable. With the rollout awning its not practical/feasible to transport it in or on your tow car. Even if it was, it would remove the quick and convenient benefit of setting up a rollout awning.

There is also a common perception within the caravanning community that rollout awnings are not as strong/sturdy as a traditional pole awning. The poles associated with rollout awnings are generally lighter/thinner. Hence a rollout awning with the associated side panels is perceived to be not as resistant to gusts of wind compared to a traditional pole awning or an air awning. In my post, are air awnings any good I do discuss how from my observations that do cope well with gusts of wind.

However, I don’t have any semi-scientific study/test which I can refer to which has tested rollout awnings versus traditional pole awnings and air awnings in windy conditions. What I will say is that every awning is only as good as its storm straps in windy conditions.

For short breaks in the summer months, I really do think rollout awnings can provide good utility to many caravanners without the hassle of a separate traditional awning. How well rollout awnings with side panels compare to the traditional pole/air awnings is a different question. Obviously that will also depend on the features of specific products, build quality etc.

What I will say is before you purchase any type of awning for your caravan really think about what you need and how you want to use the space. For caravaners who sometimes travel as a couple, sometimes as a full family, its rare one single awning is going to be suitable for every trip. Therefore, owning a rollout awning alongside a separate awning may be an option you want to consider. I discuss this more in my best caravan awnings post.

Thanks for reading and I hope the above will help you to make a decision on the next caravan awning which will best suit you. Furthermore, I hope at some point in the near future you consider coming to visit us here at Horton Common Campsite to experience our fully serviced pitches. 🙂

Here at Horton Common, we provide fully serviced pitches. However, being a small caravan site with no toilet/shower facilities many of our guests also visit other small CS (Certificated Site) or...

Here at Horton Common, all our pitches are hardstanding and fully serviced. Each pitch has 16A power, two freshwater taps and our trough wastewater removal system.

We Are An Amazon Affiliate

Hence, if you visit Amazon through one of our links and decide to purchase a product we receive a small commission with no additional cost to you. 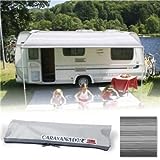